A fireplace adds a lot of beauty to your Manhattanville, NY home. Fireplaces are an excellent place to curl up with a good book, to spend some quality time with your loved ones, and just to sit back and relax while enjoying the warm glow (especially when the cold winter temperatures roll in!) However, once the fire has gone out and the embers have been extinguished, many property owners fail to recognize the importance of fireplace cleaning, or they realize but are unaware of how difficult it is.

Though they’re beautiful when they’re burning, fires leave behind a lot of debris, such as soot, ash, and creosote. Cleaning up the mess can be, well, messy. Plus (and more importantly), properly removing all of the waste that fires create is essential to maintain the efficiency of the structure, as well as your safety. How can you avoid the hassle that’s involved with cleaning a fireplace and ensure that the job is done right? – By hiring a reputable fireplace cleaning company!

Vacuuming, dusting, sweeping; there are a lot of cleaning jobs around the house that you can easily do on your own, but there’s one that’s better left in the hands of a professional: fireplace cleaning. Why? Here’s a look at some of the top reasons why you should seriously consider hiring a reputable company to clean your fireplace.

Believe it or not, cleaning out a fireplace requires a lot of knowledge and experience. The byproducts of fire – especially creosote – can be extremely difficult to remove. A seasoned professional will know exactly how to tackle that built-up debris and will be able to effectively remove it from all of the components within your fireplace; the damper, the firebox, the doors, the screens, etc.

The Right Tools and Equipment

Cleaning out a fireplace requires a lot more than just a vacuum and some sudsy water. A reputable fireplace cleaning professional will have all of the necessary tools and equipment to get the job done the right way; state-of-the-art vacuums, cutting-edge brooms, advanced solvents, and more. Sure, you could purchase these tools and supplies on your own, but do you know exactly what you’ll need or how to use them?

Properly cleaning out a fireplace is vital for your safety. If the debris isn’t effectively removed, there’s a chance that the blaze will end up burning far beyond your fireplace; it could quickly engulf your entire home! Creosote, a byproduct of combustion, is highly flammable. Every time you use your fireplace, this sticky substance collects within all of the interior components, including the bricks, the damper, the doors, and even the screens. Creosote is a hard, sticky substance and it can be extremely difficult to remove on your own. To ensure the safety of your home and family, having a professional do the job is definitely in your best interest.

Dirty bricks, built-up ash, and soot; dirt and debris detract from the visual appeal of your fireplace. A professional will offer a range of services, such as fireplace brick cleaning, vacuuming, sweeping, dusting, and more. These services will restore the beauty of your fireplace so you can continue to enjoy its aesthetic qualities.

Cleaning a fireplace requires numerous tools and supplies, the cost of which can be pretty high. Plus, if you damage the fireplace or you fail to properly clean it and a fire starts, the repairs can be exorbitant. Given all of these factors, hiring a professional will actually end up saving you money in the long run.

Between the setup, actually cleaning the fireplace, and then cleaning up after you’ve finished the job, fireplace cleaning can take several hours; not to mention the fact that it can be a very cumbersome task. If you aren’t keen on the idea of spending a day off covered in soot and ash and tidying up a huge mess, you should definitely hire a pro to clean your fireplace for you!

Given the money you’ll save, the ease, the improved safety, and the overall better results you’ll receive, when you hire a professional fireplace cleaner, you’ll have peace of mind knowing that the job will be done the right way.

Looking for Fireplace Cleaning Near Me? Contact Ageless Chimney!

If you live in the Manhattanville, NY area and you’re looking for a professional fireplace cleaner, contact Ageless Chimney! With more than a decade of experience, our fully licensed, insured, bonded, and Better Business Bureau accredited company offers a full range of fireplace cleaning services and provides outstanding results. In fact, our long-time clients consider us the best fireplace cleaner in New York County, and that’s a title that we’re really proud of. 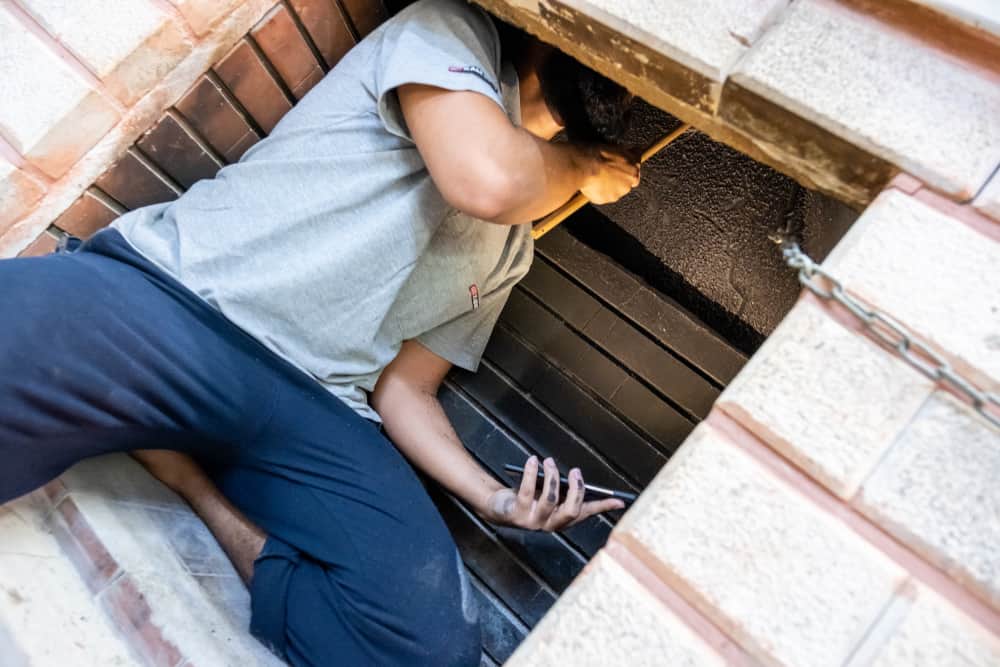 At Ageless Chimney, customer satisfaction is our top priority. Our highly trained technicians will go to great lengths to ensure that all of your needs are met. When you hire us to clean your fireplace, you can have complete confidence knowing that we’ll exceed your expectations.

Call 516-795-1313 today to learn more about our fireplace cleaning services, request a free estimate, or schedule an appointment! You can count on us to restore your fireplace’s beauty, functionality, and safety.

Some information about Manhattanville, NY

Manhattanville is a neighborhood in the New York City borough of Manhattan bordered on the north by 135th Street; on the south by 122nd and 125th Streets; on the west by Hudson River; and on the east by Adam Clayton Powell Jr. Boulevard and the campus of City College.

The village of Manhattanville was founded in 1806 and quickly gained prominence as an outpost of the city. The village grew around the crossroads of Bloomingdale Road and Manhattan Street, now roughly Broadway and 125th Street. The village’s original streets were laid out by Jacob Schieffelin and other wealthy merchants, mostly Quakers, who had country seats in the area. The town thrived as a result of the development of Manhattan Street from the Hudson River, whose convenient access also became a crucial catalyst in the growth of the older village of Harlem to the southeast on the Harlem River. Situated at approximately the same latitude, Harlem and Manhattanville flourished together throughout the 19th century as the two most prominent villages in upper Manhattan.

Manhattanville sits in a valley formerly called Moertje David’s Vly (‘Mother David’s Valley’; in Dutch, Vly is short for vallei, or ‘valley’) during the Dutch Colonial period and as Harlem Cove during the English Colonial period. During the American Revolutionary War, the valley was also known as the Hollow Way, where the main action of the Battle of Harlem Heights began under the command of General George Washington. During the War of 1812 the valley’s southern ridges figured as the site of the Manhattanville Pass, whose defense fortifications and breastworks included Fort Laight and Blockhouse No. 4, which became the sites of Morningside Gardens Houses and PS 36, respectively.

Manhattanville’s early population was a diverse and eclectic mix of intermarried American patriots and British loyalists; at least one prominent former African slave trader (this seems to be a reference to Michael Hogan, whose wife was of mixed British and Indian ancestry, born in Bombay); slave owners and enslaved African-Americans; Quaker anti-slavery activists and free black abolitionists; tradesmen, poor laborers and wealthy industrialists. Many were affiliated with the same institutions, principally the historic New York City landmarked St. Mary’s Protestant Episcopal Church, organized in 1823, which was the first Episcopal church to dissolve pew rent in 1831, and the Manhattanville Free School (established in 1827, later Public School No. 43) still at their original sites. Manhattanville’s most prominent resident was industrialist Daniel F. Tiemann (1805–1899), owner of the D. F. Tiemann & Company Color Works, who was also Mayor of New York City from 1858 to 1859. The Tiemann laboratory and factory which was originally located on 23rd Street and Fourth Avenue in Gramercy, near Madison Square Park, relocated uptown to Manhattanville in 1832, in part due to an underground spring of running water at the new uptown location, which is today the site of 560 Riverside Drive.